The sights we recommend to visit

The emerald island of Thassos belongs to the northern part of the Aegean Sea and east of Thrace, meeting the requirements of every visitor who wants to know it. The enchanting beaches with blue waters and lush forests highlight the island’s natural wealth. Finally, Thassos is famous for its cultural environment.

In Thassos the most famous and important for Eastern Macedonia and Thrace, an archaeological museum was built in 1935 and renovated in 1999. There are 18 halls within the 2376 sqm exhibition with collections and 1700 objects from the 7th century BC to the 7th century. A.D. In the basement of the museum, there are ruins not visible from the Roman and Classical periods, but visible. The most important exhibits are Kouros (3.5 meters high), Pegasus, statues of men and women, Hadrian’s statue, many coins, as well as many sculpture and pottery masterpieces.

The Archangel Michael Monastery is the largest monastery on the island of Thassos and is located 33km from the village of Limenas. Overlooking Mount Athos and the Aegean Sea, it is built on a large rock on the cliff. Here are kept nails from the crucifixion of Christ and a piece of the Holy Hull. In 1974, a nun came to the monastery where they worked and after many donations by the faithful, the monastery acquired a large fortune. It is now a unique women’s monastery, dependent on the Athos monastery of Filotheos.

In the village of Panagia, an adventure lover will find the unique cave of Drakos, popularly known as Drakotrypa. Its unparalleled underground beauty, as well as the amazing route to it will amaze every visitor. The walls of the cave are considered art by the locals, who argue that nature gave them this unique cave, although there are no longer the stalagmites and stalactites that it used to have.Stalactites and stalagmites mimic the shape of a dragon!

Besides the cave of Drakotrypa in Panagia, the cave in the village of Rachoni is also interesting.

The cave of Panagia Panagouda

Next to the Church of the Virgin Mary, which celebrates August 15 in the village of Maries, is the Panagia Panagouda Cave. A Turkish man, preaching for the treatment of his disabled wife and wanting to honor the Virgin Mary in 1813, he built the church. In 1800, locals found the magnificent image of Our Lady in a swamp. The cave with the holy shrine invites the faithful to worship.

The temple of Dioskouroi is dedicated to Dioskouroi and two three-aisled basilicas of the 5th century. A.D. It is located in Alyki, which is one of the busiest beaches of Thassos.

Kastro, a mountainous settlement, northeast of Limenaria, at an altitude of 450 meters above sea level. Due to its location, the inhabitants remained protected from pirate looting over time. Its name derives from the ruins of a castle that existed here since ancient times. A Genoese Jacob Gatelluzzi in the years of the Frankish rule built the castle on a mountain peak after the Byzantine Emperor Emmanuel II Paleologos first conferred on him the island of Lesvos and Thassos in 1414. The Gattelussi family who ruled Thassos for 40 years. The Church of Agios Athanasios, a monument protected by the Greek state, is located in the center of the village of Kastro. There are no permanent residents in the Kastro today.

At the port, located in the center of the village of Limenaria and on a rocky promontory at the sea, is the majestic “Palataki“, a two-storey preserved building. Influenced by Central European currents, the narrow sides are raised by 2 turrets and are rectangular in shape. It was built in 1903/4 as the management building of the German company Speidel. The German company then operated the Thassos mines from 1903/4 to 1963.

Several traditional costumes and professional tools are on display at the Folklore Museum of Limenaria. The museum as well as the local Limassol Cultural Association “Kastro”, are housed in the old community building

In a traditional theological house, in the two-storey mansion of the Hatzigiorgis family, the folklore museum of Theologos, was formed. The mayor who was Hatzigiorgis announced the revolution against the Turks in 1821. The museum exhibits household items, traditional costumes, loom, and traditional professional and household tools.

The renovated residence (1740) of a captain with traditional textiles and furniture houses the Folklore Museum of Kallirachi. The art exhibits feature paintings with paintings and nautical photographs transferred to the island from the Kavala Maritime Museum.

Above the ancient market at a height of 137 meters on the first hill is the Acropolis Archaeological Site. The marble fortified walls of the Acropolis kept the city’s wealth as a treasury. The ancient temple of Athena dates to the beginning of the 5th century and appears on the second peak. The Sanctuary of Pan dominates the highest third peak. Climbing to the top you can enjoy the magical view of the sea and the lush landscape.

In 1948-1955, excavations made by the Archaeological School of France discovered the ancient market of Thassos. In the 4th century BC, construction began in the 2nd century BC. We have its completion. The ancient market of Thassos is the religious, political, commercial center of the island and the heart of the ancient city. It was developed towards the sea and the 3 gates provided access to the port of that time.

The ancient theater of Thassos is located high on a hilltop in Limenas. The orchestra, part of the stage, the hollow of the theater, and the lanes, were discovered in 1921 by the first French archaeological school. In the 1st century AD, the orchestra was transformed into an arena and the space was used for duels. The marble facade was built in the early 3rd century BC. And the foreground was dedicated to Dionysus. Today, 2000 spectators can enjoy panoramic views of many concerts and spectacular performances organized by the Thassos Festival.

The small port in the village of Limenas was the Military Port of the ancient city at that time, where it was surrounded by two circular towers. The ancient port of Thassos was transformed into a commercial port during the early Christian period. Three gates provided seafarers with access to the port.

Just next to the present carnival in the area of Evreokastro, Limenas is the commercial port of ancient Thassos. It communicated with the market through gates and was protected by a semicircular defense tower. In the 7th century BC, its use has ceased and there are still visible pieces beneath the surface of the sea at a distance of one meter.

Just 32 kilometers from Limenas, southeast of Thassos, you can see the two bay of Alyki. It is a peninsula of great archaeological interest. There lies the ancient white marble quarry. From the Archaic period to the Byzantine years, the marble quarry was in operation. It had a large population, a large port and in the 7th century BC, a sanctuary dedicated to the god Apollo was founded on its eastern side. Many sailors left the names of their lovers and theirs engraved on the steps of the sanctuary. In the ancient settlement of Alyki, the places of worship of the pilgrims were the ruins of the 5th century. A well-preserved Kouros in the Istanbul Museum was found in excavations in 1896. It is believed that after a major earthquake, the Alykes were abandoned.

In Limenas village, near the Acropolis and Ancient Theater, is located Jewish castle (Evreokastro). In the area you will see some ancient and the chapel of the Holy Apostoles. Evreokastro is a few meters above the sea and the sunset from this spot is magnificent.

Following a rural road and after passing the mountain village of Kazaviti, you will see the monastery of St. Panteleimon at the top. In the courtyard of the monastery is the miraculous cave with the holy water. We celebrate Saint every year on July 27 with liturgy and march through the mountains. It was built in 1843 and became a monastery in 1987.

Holy Monastery of the Dormition of the Virgin

The miraculous icon of Virgin Mary, which is celebrated on August 15, is kept for pilgrimage to the Holy Monastery of the Dormition of the Virgin on a hill between the two villages of Maries and Skala Maries. Inside the monastery is the rock that springs up in the sanctuary.

Holy Temple of the Dormition of the Virgin

With the financial assistance of the residents of Thassos and Vatopedi Monastery in 1831, the church of the Virgin Mary was built from the ruins of ancient temples where numerous plaques and stones were found. The iconostasis was completed in 1881 and the height of the church reached 18 meters. Prepare a watermelon after the Divine Liturgy. To the faithful on August 15 at the feast of Virgin Mary.

The church of Saint Nicholas (patron sailor) was built in 835 AD on the ruins of ancient buildings.

In the mountainous rocky village of Kastro is the church of Agios Athanasios. In 1804 within 40 days, the inhabitants of the village with the permission of the Sultan reconstructed the church. The Saint is celebrated every year on January 18, giving life to the village. The church, which is one of the oldest churches on the island, is open every Saturday last Saturday.

The metalleia, which was started in 1905 by a German company called Speidel, was an old iron-working factory. After 7 years, in 1912, in the wake of World War I, mining was discontinued, but in 1925 Vielle Montagne, which was again discontinued in 1930 due to financial failure, reopened us. The mining area is rich in silver, lead and cadmium. In 1957, the mines passed into the hands of a Greek company but again after 6 years we have their permanent sailing discontinued. Outdoors today there are outdoor artworks, pebble beach, and white sand.

In the village of Potamia in an old school building located the famous Vagi Museum which was inaugurated in 1981 Vagis was born on January 14, 1894 in Potamia, his father was from Thassos and his mother from Hydra. He died in March 1965 in New York but was buried in Potamia. In the museum there are 15 paintings and 98 sculptures. At the age of 19, she immigrated to New York where he studied sculpture at Beaux Arts Institute. In 1964 his works exhibited in Thassos.

On the island of Thassos there is a stone bridge to Theologos, which facilitated the move from Theologos to Astrida. There are several bridges in Kallirachi, which were used to connect Kakirachi to the present Kallirachi, and to transport water to the square.

Tarsanas was a fishing refuge for the monks of Mount Athos. Today it is a center for cultural events.

Kalogeriko, a 19th-century two-storey building, is located in Limenas in the old port. It belongs to the municipality of the island and is a center of cultural events.

The small Lake on Thassos is located in the village of Maries. It is surrounded by dense pine trees, many benches and kiosks. This is an artificial lake where you can relax, but keep in mind that swimming, fishing and camping are forbidden. There are nearby Waterfalls that make the scenery amazing!

The goat and many local meats on the skewer can be enjoyed in taverns with traditional music in the mountain village of Theologos. The village owes its picturesque appearance to traditional stone mansions with flowered courtyards and stunning views.

In the area of Prinos and heading towards the mountain we meet the Grand Prinos or the Grand Kazaviti, where scattered on the slope we will see many taverns and mansions. Nature is magic. 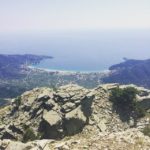 The highest mountain peak, Ipsario (1204 meters), covers 70% of the island’s total area. The mountaineering shelter at the top can accommodate hikers. When the weather is nice and clear, you can see from the top the coasts of Macedonia, the Dardanelles, Samothraki, Lemnos and Mount Athos. Chestnut, fir, plane trees, pine trees and many olive trees are planted at the foot of the mountain.

We are waiting for you! 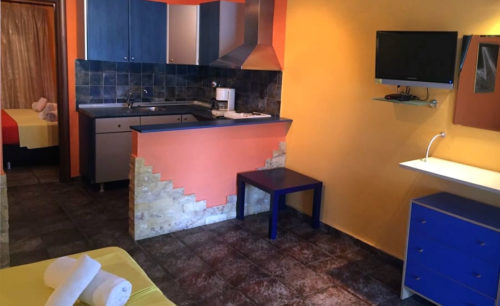 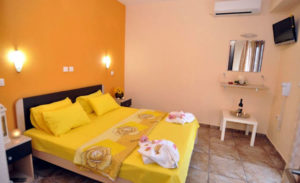 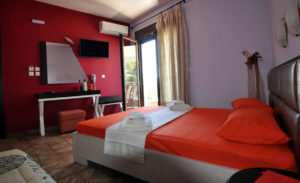 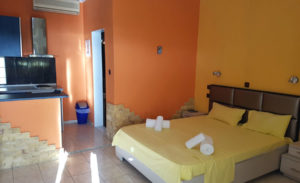 Explore our rooms and make your reservation